Technorama is dedicated to training the next generation of technologists, and we’ve been looking for creative ways to do that.   The Tech Blitz idea came from a very simple concept: it’s much easier for volunteers to achieve in a group and with a defined timeframe.   The Studio Blitz aims to assist a station to spring-clean and refurbish its studio technology over a weekend, while training and skilling up a team at the same time.

On the weekend of 12/13 January 2019, we put that into practice at 2RRR. They put their hands up to be the test bed for the first outing of the Blitz packaged by the CMTO to be delivered as a pathways class. 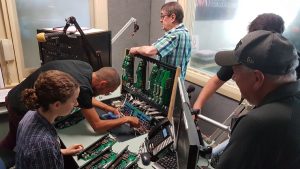 RadioInfo wrote a great report on the class, which received outstanding support from the 2RRR and the participants of the first class.

You can read the RadioInfo article here.   And then check out some of the great photos that came out of the day.

There are more blitzes planned for the coming year, and CMTO will shortly release details of how your station might participate.

And as RadioInfo hinted, Technorama is working on a similar approach to transmitter training.  RadioInfo is right: many people talk about the need for technical training.  Technorama is doing something about it, and the CMTO is making it possible for the training to be delivered.  It’s practical and an example of a great ecosystem.