Every year, the Technorama Awards recognise and celebrate the excellence, innovation and dedication of technologists across the community broadcasting sector.

The Awards are judged by a Committee of experienced assessors and senior sector identities.  After an intense period of consideration the Committee, this year Chaired by Natalie Pozdeev, decided that three awards would be made at the TR19 Gala night on 4 May 2019.

As Natalie pointed out, “these Awards create focus on achievements that often go unthanked at stations – because when everything is working well, who notices what it took to make that happen?  The Technorama Awards recognise those people and their achievements.”

Natalie also stressed the independent nature of the judging process: “When I say independent, I mean we’re entirely independent of the Technorama Committee and work hard to ensure that the process is fair and transparent. This includes declaration of any conflicts of interest, and assessing each nomination on its merits, and against the published judging criteria”.

Lifetime Technical Contribution to a Community Radio or TV Station

This award is presented to an individual who has shown dedication, expertise, quality and technical leadership at a station over a long period of time.

This year’s winner was Nathan Butler for his work at 5GTR-FM in Mount Gambier.  Nathan was unable to be at TR19, and the award was accepted for him by Frank Wilcox.

Nathan was later presented with the award at the station in Mount Gambier.

The award for Outstanding Technical Collaboration recognises an individual or team who has helped bring technologists together, and built a collaborative team to achieve successful technical outcomes.  This year’s winner was the first rollout of the CMTO Studio Tech Blitz program.  The award was presented to the 2RRR Station Technical Blitz team who made it happen:  Gemma Lipman, Keith Rider, Felipe Vilches, John Maizels, Frederica Mantel, Bruce Mott and Chard Currie

Lifetime Technical Contribution to the Sector 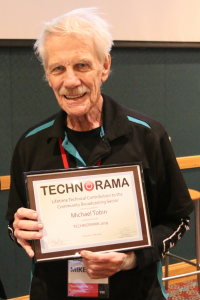 This is Technorama’s highest award, and is  presented to an individual who has shown dedication, expertise, quality and technical leadership at a group of stations or sector organisations over a long period of time.

Natalie Pozdeev commented that the judging was especially rigorous this year.  She said that the committee felt the nominations which were selected were all absolutely first rate and deserving, and that applied particularly to the top award for Lifetime Technical Contribution to the Sector.

For his contribution to the sector through work for the CBAA, CBAV, KLFM and Technorama itself, the judges gave the award to Mike Tobin from KLFM.

We congratulate all the winners, and thank you for your contribution to technology activities in the Australian Community Radio sector.