Care and feeding of faders

A few people have asked about cleaning faders, and what was the technique that I taught at the Studio Tech Blitz.  That is the subject of this article.

Is this technique based in good science? 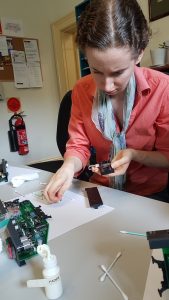 Yes, I believe it is.   A long time ago I had to do a major fader refurb for a Soundcraft desk.  Some of the faders were audibly noisy and scratchy around the “zero” point (noticeable on-air).  A few of the faders were so sticky they almost could not be moved.  If your mixer hasn’t had maintenance for a while, feel all the faders and you’ll quickly conclude that some move more easily than others;  if so, it’s time to do some work.  Three to four years seems to be a good interval between refurbs, but your slideage may vary.

As a great believer in “phone a friend”, I first called Penny and Giles in the UK to ask them for their recommended cleaning procedure for P&G faders.  I particularly wanted to know whether isopropyl alcohol was the right solvent to use on resistive tracks.   It definitely is not;  they put me straight, and what follows is the procedure that I developed from the advice given.

Sidebar:  it turned out that the faders in that desk were Alps and not P&G.  This article covers both brands of fader because the process is almost the same.

As a preamble, consider that faders are really expensive and you’re not likely to get replacements on the weekend or in the middle of the night if you ruin one.  Treat faders as though they are made of unobtanium.  If you want any pot (or switch) to last beyond this exercise, don’t use methylated spirits on the resistive tracks or other working parts of the pot (it contains all kinds of stuff you don’t want on faders); don’t use WD40 or RP7 (unless you want to dissolve the fader) and don’t use anything scratchy during the process.

What about faders on a digital desk? 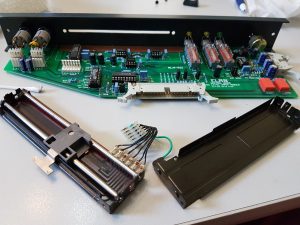 Good question.   Digital desks literally use digital faders; there’s no audio involved in the fading process, only numbers. The slider control element might be resistive or the slider might be a linear encoder.  Regardless, your desk’s fader thingy is going to be followed by electronics which interprets the slider’s behaviour and does maths to produce audio.  The advice here might not apply at all to a digital desk.

What will you need? 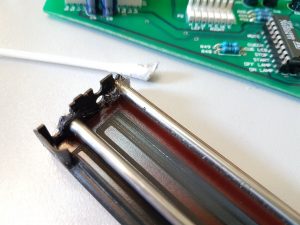 Clean all the crap out of the fader. There will most likely be hair, fluff and skin cell buildup.  That might sound disgusting, but live with it.  Faders are almost always  operated by fingers, and fingers are just rolling in skin.  It’s natural that some skin cells will accumulate over time, and that dross needs to be cleaned off.

Use cotton buds and carefully, with no pressure, wipe around (but not on, yet) fader tracks and contaminated surfaces.  Be especially careful to not cross-contaminate from the chrome slider bars, or any other messy part, to the resistive tracks.

Hint:  skin cells won’t dissolve in anything you’d want to have near faders or your skin.  Just clean carefully and thoroughly with buds, water, maybe some isopropyl alcohol, and possibly some carefully applied surfactant. 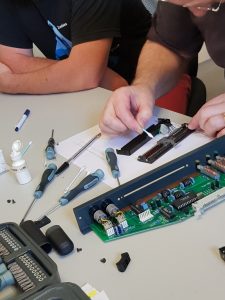 Put the water in a glass so you can always see how clean it is, and use that to pour some of the water into a clean lid.  Dip the cotton bud from the lid.  Keep the water in the lid clean.  Don’t use dirty water on the next fader.  Cross-contamination is your enemy, and can turn a working fader into one that no longer fades the way you want.  Got it?  Have I said “don’t cross-contaminate” enough times?

The resistive element in a P&G fader is a set of conductive plastic tracks, and those tend to stay pretty clean. Alps faders have carbon tracks and most likely when you wipe over you’ll get some carbon transferred to the bud. It won’t be a lot.  If you think there’s a lot of carbon coming off, do a second pass.   The excess carbon might be contributing to scratchy noise, although it’s also providing lube.  Don’t overdo the cleaning.

Use a teased out cotton bud dipped in water to gently clean along the resistive elements. Reminder:  work lengthways and don’t rub across the track.

The biggest danger is that you’ll accidentally scratch a track and cut it, which would be terminal for the fader.  Damage is unlikely, but it’s not impossible – especially if you use force or accidentally get some abrasive crap under the bud before you wipe.

Run the damp bud along the track, and then run a dry bud along the same track. The dry pass will pull off almost all the water you’ve laid down.

In the case of a stereo Alps fader, the second track is most likely to be hidden under a chrome runner. The best way I’ve found to deal with that is to tease out a cotton bud and bend the cotton at right angles.  You should then be able to hold the bud shaft vertically and wipe the damp horizontal cotton pad along the track under the runner, and without contacting the runner. Use the same process for both wet and dry pass.

Let the fader tracks dry fully.  If you can see water droplets, shine, or residue when you hold the track to the light, repeat the process and allow to dry.

Don’t go near the wipers under the sled.  The wipers are unlikely to be grimy, and are the other thing that you could damage in a way that might be unrecoverable.  Just move the sled out of the way so you can clean all of the resistive track.

Next clean the chrome runners that the fader sled runs up and down. If the runners are generally clean and don’t have anything adhering, then you don’t need to do more than wipe over with a clean bud. If there is crap on the runners, then you will probably need to use isopropyl alcohol to clean them down. 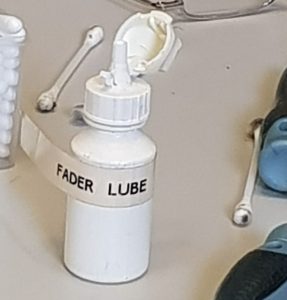 I have a jealously guarded bottle of P&G silicone lube.  It only takes the tiniest droplet of lube transferred to the runner to do the job.  The lube will be distributed along the runner by moving the fader up and down enough (which you do before reassembly).

Worst outcome: you use too much silicone lube, and some ends on the track. That’s when you need to get isopropyl alcohol and clean up the mess, and it’s probably the only time that you would need to put a degreasing agent on the track.  Then start again with the cleaning cycle.

Tip:  put a piece of paper under the runner to protect the tracks before you put the droplet of lube on the runner.

Question:  what’s a good silicone lubricant?  There are many, and I can’t recommend anything other than the stuff I obtained from a P&G distributor.  WD-40 is technically a silicone lubricant, but it’s not likely to be suitable for faders.  “Dow Corning 510 or equivalent” is recommended by Telos Alliance.  Deoxit Fader lubricator has also been mentioned.   My best advice is:  if you’re unfamiliar with a treatment, do exactly ONE fader and use it for a while before moving on to the rest.   The worst possible refurb outcome would be where you accidentally wreck a console full of faders in one pass.

5. Put everything back together.

Hint:  if the two channels don’t track within a fraction of a dB when you reassemble the fader, you might have a bad plug connection.

Over time the grooves in fader knobs clog up.   Fastest way to clean fader knobs:  water, a little surfactant (dishwashing liquid is good) and the electric toothbrush.   Don’t use too much pressure because an electric toothbrush can be surprisingly abrasive.  However once the in-slot garbage is softened with water, the toothbrush will do a very good job.  You will most likely need surfactant to get the greasy stuff away from the knob.   Oh, and clean the brush after each knob; you’ll see what I mean after you do the first knob and the toothbrush turns grey – proof that you’ve done a good job.  Rinse with water and allow the knobs to dry.

Reinstall the fader, and check that all is good.  Feel the fader and have a listen to audio passing through it.  Listen for mechanical and electrical scratches or clicks.  If you’ve done this carefully, there’s very little that can go wrong, and your fader should feel amazing.

Was this helpful?  Post a note on the Community Radio Tech Q&A group to let us know.